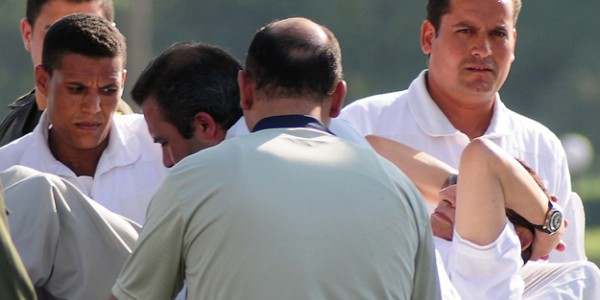 Egypt’s Mubarak leaves jail for house arrest (AFP) / 23 August 2013 Egypt’s toppled dictator Hosni Mubarak was transferred from prison to house arrest at a military hospital on Thursday, in a move overshadowed by a blistering crackdown against his Islamist successors.   The former strongman, forced to quit in early 2011, was flown by medical helicopter to a military hospital, where he will remain under house arrest as he stands trial on corruption and murder charges. His ouster in 2011 was a pivotal moment in regional democratic upheavals that in Egypt led to an Islamist government, which lasted a year before a popularly backed military coup last month. In other circumstances, the 85-year-old’s removal from prison might have caused shockwaves. But with Egypt mired in a deadly conflict between the military-installed government and Islamists, Mubarak’s transfer took place amid little fanfare or protest. He was ordered released after his lawyer argued Mubarak’s stay in prison had exceeded the maximum pre-verdict detention, and Mubarak made financial amends for one of his charges. He still faces trial for corruption and his role in the deaths of protesters during the uprising that toppled him, with his next hearing on Sunday. Prime minister Hazem Al Beblawi, empowered with the authority to order arrests under the current state of emergency, ordered Mubarak to be placed under house arrest after release from jail. Mubarak chose to be held at the military hospital, the official MENA news agency reported. The decision to grant Mubarak pre-trial release added a volatile new element to the political turmoil that has gripped Egypt since the army ousted president Mohammed Mursi on July 3 following massive protests against him. More than 1,000 people have been killed in the past week in violence following the forcible break-up of two pro-Mursi camps in the capital. Authorities have arrested dozens of members of Mursi’s Muslim Brotherhood, including its supreme guide Mohamed Badie — the first time the group’s chief has been arrested since 1981. Mursi himself is being held at a secret location and faces charges related to his 2011 escape from prison and inciting the death and torture of protesters. The juxtaposition between the fates of the two ousted presidents, Mubarak and Mursi, is notable, analyst Hisham Kassem said. Mubarak “committed numerous crimes… against the country, but managed to hide the evidence, particularly as all the state’s institutions were working for him at the time he was overthrown.” “The opposite is true for Mursi, who was thrown in prison while all the state’s apparatus were against him.” Arrests of Brotherhood leaders continued, with authorities detaining Ahmed Aref, a spokesman for the group, in Cairo. On Thursday, Human Rights Watch condemned the government for failing to protect churches, but also the Brotherhood for failing to halt incitement against Christians. Violence has also targeted police and soldiers, including two who were killed in a drive-by shooting near the Suez Canal town of Ismailia on Thursday. The unrest has prompted international criticism, and EU foreign ministers agreed at an emergency meeting on Wednesday to suspend the sale of arms and security equipment to Cairo in response to the mounting violence. They issued a statement calling recent security operations “disproportionate”, while also condemning “acts of terrorism” in the Sinai and the church attacks. But they expressed concern over the economic situation and said “assistance in the socio-economic sector and to civil society will continue”. The United States has also criticised the violence, as well as Badie’s arrest, and announced the cancellation of joint military exercises. But it has stopped short of halting its $1.3 billion annual defence aid package to Egypt, and denied reports it was withholding aid. Oil-rich Saudi Arabia, which backs the army-installed interim government, has said it would step in with other Arab nations to fill any funding gap if Washington halts aid. Meanwhile, a Hamas official said Egypt is set to reopen the Rafah border crossing with the Gaza Strip daily from Saturday after closing it in the wake of last week’s bloodshed. Taylor Scott International