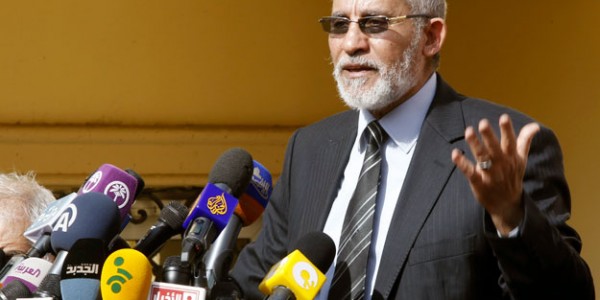 Egypt arrests Muslim Brotherhood chief (AFP) / 20 August 2013 Egypt’s government Tuesday pressed its fierce campaign against the Muslim Brotherhood of ousted president Mohammed Mursi, effectively decapitating the group by arresting its supreme guide. The detention of supreme guide Mohamed Badie could throw the Brotherhood into further disarray as it struggles to withstand an onslaught by the army-installed authorities. It also raises fears of new violence in the country, where nearly 900 people have died in days of clashes between security forces and the supporters of Mursi. In the latest bloodshed, militants killed 25 policemen just hours after 37 Muslim Brotherhood prisoners died in police custody. Judicial sources meanwhile said fresh accusations had been levelled against Mursi, who has been detained at a secret location since his July 3 ouster by the army. And former president Hosni Mubarak won conditional release in the third of four cases against him, but remained in detention on the last case. The interior ministry said police picked up Brotherhood chief Badie near Rabaa Al Adawiya square, where more than 280 Mursi supporters were killed on Wednesday as police cleared their protest camp. A senior Brotherhood official, Ahmed Aref, said on its website Monday that Badie’s arrest would change nothing. “The leader of the Muslim Brotherhood is just one individual… among the millions who oppose the coup,” he said. Dozens of senior Brotherhood members have been arrested or are at large, after being accused of crimes including inciting the deaths of protesters before Mursi’s ouster. Violence continued to rock the country and draw international opprobrium. On Monday morning, militants killed 25 riot police in two buses in the Sinai peninsula, in the deadliest such attack in decades. The interior ministry blamed the attack on “armed terrorist groups” and Egypt closed its border with the Palestinian Gaza strip, near where the attack occurred. Security sources said another policeman was killed in north Sinai, bringing the number of security force members killed in Sinai since Mursi’s ouster to 75. United Nations chief Ban Ki-moon said he was “deeply disturbed” by the deaths and called for a “full investigation to ascertain the facts surrounding this incident.” Egypt’s foreign minister Nabil Fahmy said Monday in Sudan that his country was on the “right path.” But the international community has fiercely condemned the violence, with rights group Amnesty International decrying it as “utter carnage”. The group’s secretary general Salil Shetty warned the country’s government had “stained its human rights record”. And Human Rights Watch called on Egypt’s rulers to “urgently reverse” instructions for police to use live ammunition against protesters. In response to the violence, EU ambassadors held an urgent meeting in Brussels and foreign ministers were due to review the bloc’s ties with Egypt on Wednesday. The European Union has said nearly five billion euros ($6.7 billion) in aid to Egypt is under review since Mursi’s ouster. The United States has cancelled joint military exercises with Egypt but stopped short of suspending $1.3 billion in annual aid. US Defence Secretary Chuck Hagel urged Egypt’s interim government to take an “inclusive approach to reconciliation” but admitted Washington’s influence was limited.   Taylor Scott International