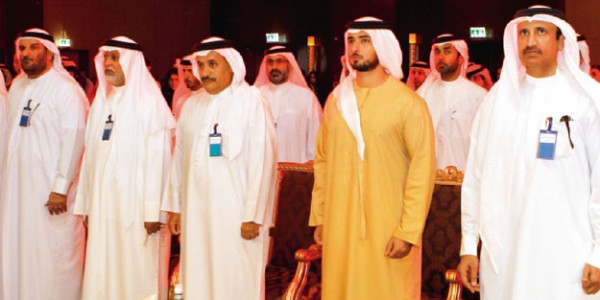 ‘Effective development central to world peace’ Sarah Young / 18 April 2013 Increased effectiveness of development projects, not necessarily more money, is needed if world peace is to be achieved, says a representative of the new UAE ministry for foreign aid. Shaikh Majid bin Mohammed, Abdulla Al Shaibani, Secretary-General of the Dubai Executive Council and member of the Board of Directors of the International Humanitarian City; Ibrahim bu Melha, Head of the organising committee of the Dubai International Holy Quran Award; Mohammed Ibrahim Al Shaibani, Director-General of Dubai Ruler’s Court; and other officials during the opening ceremony of the First World Peace Awards Forum 2013 in Dubai on Wednesday. — KT photo by Juidin Bernarrd Speaking at the First World Peace Awards Forum 2013 inaugurated by Shaikh Majid bin Mohammed bin Rashid Al Maktoum, Chairman of the Dubai Culture and Arts Authority, on Wednesday, a representative of the Ministry of Development and International Cooperation, Hazza Al Qahtani, said recipient and donor countries needed to work more closely together to ensure aid funding was effective. Al Qahtani said the UAE would soon be “witnessing a unique qualitative leap in the level of foreign assistance and development”, along with a new strategy for foreign aid. However, the creation of the new ministry, which replaces the Office for the Coordination for Foreign Aid, did not mean more money would be spent. It was about ensuring better organisation and coordination, he said, and signified the commitment of the UAE to achieving the Millennium Development Goals (MDG). “It’s not about spending more, it’s about utilisation and delivery and better evaluating the impact of an aid project.” A continuing focus area for the year would be Syria, with four foundations working out of Jordan to deliver help. This included initiatives such as the new refugee camp, Marjeeb Al Fahood, which would house at least 25,000 refugees, along with schools accommodating 4,000 students, at a cost of more than Dh300 million so far. Nothing had been confirmed yet, but Al Qahtani said he would not be surprised if the UAE also offered assistance to Pakistan and Iran following Tuesday’s 7.8-magnitude earthquake. Effective development projects were crucial to peace building, he said, citing the Marshall Plan, a United States aid programme which helped rebuild Europe following World War Two. “This reconstruction has led to stability in these countries from 1945 to today. These countries haven’t witnessed any war, and foreign aid was essential to establish peace in every country.” Al Qahtani said the UAE government had provided more than Dh900 million in foreign aid last year. Earlier this month, the UAE climbed up the Organisation for Economic Co-operation and Development’s (OECD) rankings to 16 th place for the proportion of Gross Net Income (GNI) spent on foreign aid, putting it ahead of long-standing donor countries like the United States and Japan. The UAE ranked 20 th in 2011, and 26 th in 2010. The two-day forum, the first of its kind globally and attended by hosting organisations such as the Washington DC-based Global Peace Foundation and the Seoul Peace Prize, will be held every two years. Organiser and secretary-general of the Mohammed Bin Rashid Al Maktoum Award for World Peace, Mohamed Buhannad, said the forum enabled all organisations and awards bodies working on peace initiatives to share knowledge and experience — and come up with something even “more creative”. Following on from events such as the Boston blasts on Monday, the World Peace Award would help create generations with peaceful cultures around the world — something Dubai could already lay claim to, he said. “(Dubai is) a multi-cultural, multi-national city where different religions live peacefully. We have never seen or heard any problems here. This (city) is itself a vision or a project in what we need to achieve.” Categories of the biennial award, to be given out for the first time about this time next year, would be announced in the coming months. sarah@khaleejtimes.com