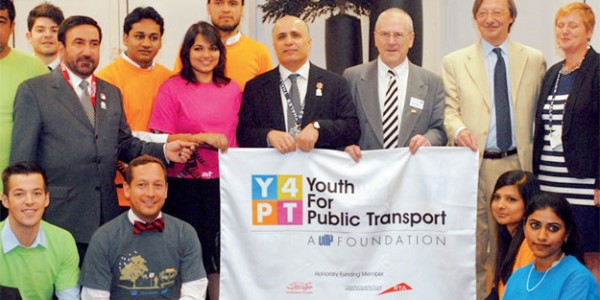 Dubai to host biennial public transport meet Staff Reporter (news@khaleejtimes.com) / 30 May 2013 Dubai has unveiled its vision for public transport during a major transport conference in Switzerland this week, including plans for a new public transport exhibition to be held in the emirate from 2014, and a new generation of youth leaders spreading the public transport message Mattar Al Tayer, Chairman of the Board and Executive Director of the Roads and Transport Authority (RTA), attended the 60 th International Association of Public Transport (UITP) Congress and Exhibition in Geneva this week.  The biennial event, which concluded on Wednesday, is an international meeting point for public transport specialists to share the latest technologies in rail and tunnel networks, interior designs of rail carriages, entertainment systems, public buses and marine transit modes. The event saw the participation of 150 delegates from 30 countries including the UAE. The RTA showcased Dubai’s public transport systems and the growth of the sector in the emirate, highlighting the Dubai Metro, public buses, taxis and a wide array of marine transport, along with RTA initiatives, such as the Wojhati, Awselni and Sharekni programmes, encouraging more people to use public transport. Al Tayer was accompanied by RTA board member Mohammed Obaid Al Mulla, acting CEO of the public Transport Agency Dr Yousef Al Ali, advisor of Dubai Taxi Corporation-cum-head of the Higher Committee of the Mena Centre for Transport Excellence Abdul Aziz Malik, former CEO of Public Transport Agency Eisa Al Dosari, and a host of RTA directors and engineers. “The RTA’s participation in this international centerpiece culminates the successful hosting of the previous edition of the UITP Congress and Exhibition held in Dubai (in) April 2011, ” Al Tayer said. This success led the UITP to agree to hold the new biennial congress and exhibition in Dubai, starting from 2014, he added. Al Tayer and UITP secretary-general Alain Flausch also officially launched the Youth For Public Transport Foundation (Y4PT), a non-profit seeking organisation affiliated to the UITP and sponsored by the RTA. With a head office in Belgium, the 40-member foundation, including 19 from the UAE, will act as ambassadors to encourage the use of public transport systems.  Taylor Scott International