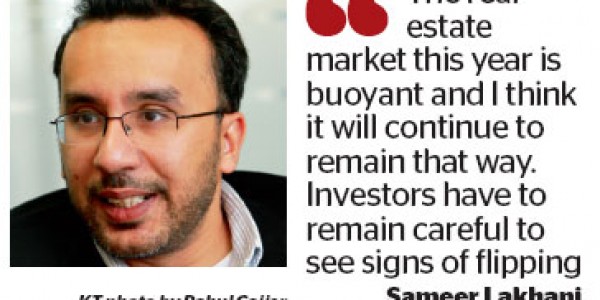 Dubai real estate buoyant Abdul Basit (INTERVIEW) / 1 June 2013 Property prices and rentals in Dubai are expected to increase by double-digit numbers this year while the decision on the emirate’s bid for World Expo 2020 will set the trend for years ahead, according to an industry specialist. “The real estate market this year is buoyant and I think it will continue to remain buoyant. Investors have to remain careful to see signs of flipping,” Sameer Lakhani, managing director of Unitas Consultancy, told Khaleej Times in an interview. “I think this year, both in terms of commercial prices as well as residential prices [breaking down into villa and condominium segments], we are looking at a double-digit increase both in terms of rentals and prices.” At present and for the last few months, the real estate market has been quite buoyant and it had resurgent activity based on certain factors, he said, adding that external factor is the World Expo 2020 bid and other major developments, including Mohammed Bin Rashid (MBR) City and major projects on the Shaikh Mohammed bin Zayed Road (the former Emirates Road) corridor. The revival of business activity is partly as a result of global economic recovery and the Arab Spring, Lakhani added. The World Expo bid will act as a catalyst for growth, creating thousands of jobs, and stimulating growth as residents move to communities surrounding Shaikh Mohammed bin Zayed Road. The UAE is bidding to host Expo 2020 in Dubai and competing with four other countries. The winner will be announced in November 2013. The World Expo has never been held in the Middle East, Africa and South-east Asia. “In Dubai, we had a revival for about a year now and it began with the residential sector, specifically in villa space. Since the last quarter we have witnessed a significant revival of activities in prices,” he said. Talking about active buyers in the market, he said that statistics released by Dubai’s Land Department indicate that they are South Asians and mostly Indians, in addition to those Pakistan, Iran and Arab countries. “Our analysis indicates that mostly end users are buying properties and now they account for one in four,” he said, adding that in 2007 and 2008 there were less end-users and lot of off-plan properties were bought due to lose credit. He agreed that “flipping” is still in the market but at very less degree. Lakhani said that Jumeirah Lakes Towers and Emirates Living are expected to outperform as end-user ownership in 2013. “A migratory effect will take place to areas such as Jumeirah Village and Sports City as tier-one markets start pricing out middle income families. Rental rates in these areas are expected to rise by 15-20 per cent this year.”  He believes that the trend of home ownership in Dubai will continue, fuelled by the creation of new jobs. Dubai World Central and Al Maktoum International Airport will be the magnet for more jobs and communities, and Dubai’s World Expo bid will act as a fillip to this. Responding to a question, he said that nobody knows about new mortgage rules, but it’s better if there are some curbs for mortgage lending. Giving Hong Kong and Singapore as examples where property buyers face strict rules for a second home, Lakhani said curbs limit speculative activity in the market that’s the reason the UAE Central Bank showed concern about it and is planning to introduce new rules and a cap. “I think check-and-balance is healthy,” he said. Quoting Land Department statistics, Lakhani said more than one out of four transactions is still mortgages. Overall, 30 per cent of transactions are mortgage which is a good sign, he added. “I think right now the challenge is to come up with more supply and we know the bulk of the additional supply is coming on the Shaikh Mohammed bin Zayed Road corridor,” Lakhani said. He added that occupancy level at the moment is between 80 to 95 per cent based on specific locations and that’s the reason developers are going south. He explained that the Marina area’s occupancy level is above 90 per cent while in Jumeirah Lakes Tower it’s above 95 per cent, and in most of these areas enough land is not available. So developers are going to Shaikh Mohammed bin Zayed Road as there is land available in areas like Jumeirah Village, MBR City, Arjan, Majan and Falcon City. Lakhani believes that there’s no bubble at the moment. To characterise the bubble, there are three or four factors. One of the factors is valuation, he said, adding that it’s rental yields, which was below four and five per cent in 2007 and 2008, respectively, and now rental yields on villas is at 5.5 per cent and six per cent, and for apartments, it’s seven per cent. Offices are even higher, he added. So for a valuation perspective, prices indicate that there is an upside potential especially compared to the rest of the world. The second indicator of a bubble is losing credit or having too much money. In 2007 and 2008, mortgages were given at zero down payments and today it’s not existing because of very prudent and conservative lending policies. The central bank is very closely monitoring mortgage lending activities. The third indicator is the amount of speculation that’s known as off-plan projects. In 2007 and 2008, one out of every three transactions was off-plan, while today it’s only at one out of less than eight. “If you consider all these three indicators, I believe around this time there is no bubble,” Lakhani said. abdulbasit@khaleejtimes.com Taylor Scott International