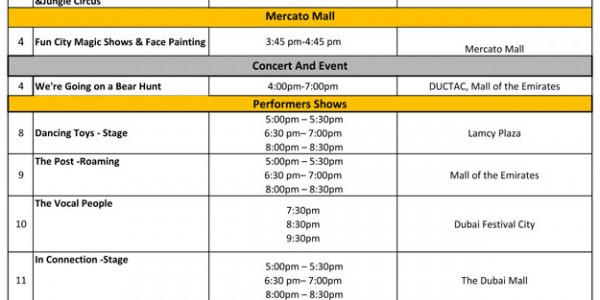 Dubai malls roll out more entertainment Lily B. Libo-on / 12 June 2013 Great shopping deals and amazing shows take centre stage at this year’s “Summer is Dubai” campaign that is drawing thousands to the malls across Dubai. Organised by the Dubai Festivals and Retail Establishment, an agency of the Department of Tourism and Commerce Marketing (DTCM), the 32-day summer festival features numerous activities, mainly for families, offering a wide range of mall entertainment and shopping promotions. Modhesh and Bananas in Pyjamas delighted hundreds of shoppers at the Mall of the Emirates during this Dubai Summer Surprises (DSS). The world-renowned ‘Bananas in Pyjamas’ were the first among the set of entertaining shows that would be staged all throughout the DSS in the mall. Modhesh was marching through the Mall of the Emirates accompanied by live music for 20 minutes. Mercato Mall In Mercato, the 16 th DSS centred on the Russian show “Dancing Toys”, featuring lively stage shows. Before coming to Dubai, this Moscow-based group performed in China, Croatia, Germany and London, but their ‘Dancing Toys’ show was exclusively created just for the DSS. The 30-minute show began with an amazing dance performance with the dancers in their attractive colourful costumes that attracted huge crowds of mostly children and parents. From boogie, swing, jazz to traditional dances, the ‘Dancing Toys’ show enthralled the audience with the performance of their ballerinas to award-winning gymnasts. Filipino tourist, Rick Pajares, who watched the show with nephew Jose Santiago, said: “I am very glad to have had the chance to witness an entertainment show like this in Mercato. I think that these kinds of mall entertainment would encourage people in Dubai to go out of their homes and enjoy summer. Despite the weather, I still think it’s fun to be in Dubai during this season.” Mexican national, Gabriela Marquez, a resident of Dubai, who also saw the show with daughter Izel said: “I live nearby, and we love coming here to Mercato quite often. But what is good about the mall is that during every DSS, they have tonnes of activities for children. This very stage comes alive with different types of shows and activities. It’s amazing really!” The Dubai Mall The Dubai Mall is not just offering the world’s best brands at affordable prices but it is serenading their shoppers with young musicians from the Brooklyn Melodies Music Centre. These talented children are strumming the nights away with their guitars and the soft tunes of their violin in a musical feast performed next to the waterfall inside the mall. The mall will be hosting many more shows, activities and performances that will have visitors, residents and families all throughout the DSS. The Smurfs are also set to perform at The Dubai Mall from June 25 to 30. Mirdif and Deira City Centre DSS in Mirdif came alive with Garfield’s birthday party on June 7, and the Garfield’s Happy Birthday to Me and Jungle Circus show will continue daily until June 13 from 4pm to 9pm. Garfield and his friends will take their show to the Deira City Centre from June 18 to 24, 4pm to 9pm. – lily@khaleejtimes.com DSS Event Calendar- July 12 Here are list of events scheduled for Wednesday, July 12.   Taylor Scott International