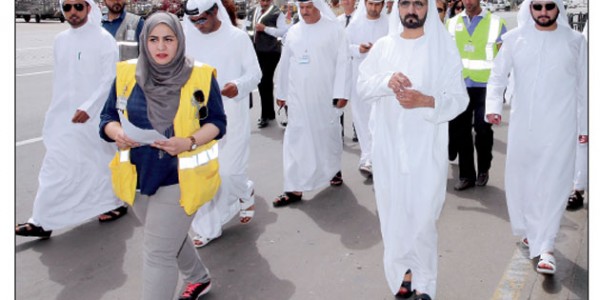 Dubai Airport is face of country: Shaikh Mohammed Staff Reporter / 23 April 2013 Dubai Airport will remain at the top of his priorities as it represents the face of the country and is the symbol of its culture and progress, said His Highness Shaikh Mohammed bin Rashid Al Maktoum, Vice-President and Prime Minister of the UAE and Ruler of Dubai, during a tour of the upgraded Terminal 2 at Dubai International Airport on Monday. Work on the first phase of the terminal is complete and when work on the second and third phases conclude, it is expected to handle 7.5 million passengers per year and will house state-of-the-art passenger and baggage facilities, including a 200-metre long and 90-metre wide main hall which will increase the terminal area to nearly 60,000 square metres. The new hall at the terminal will be officially opened on April 29. Shaikh Mohammed directed all concerned authorities to provide more facilities for passengers at all of the country’s land, sea and air ports and provide them with all means of amenities, respect and good treatment. During his tour, Shaikh Mohammed viewed the designs for the expansion of the remaining phases. The Vice-President was accompanied by Shaikh Maktoum bin Mohammed bin Rashid Al Maktoum, Deputy Ruler of Dubai; Shaikh Ahmed bin Saeed Al Maktoum, Chairman of Dubai Aviation Authority and Chairman of Emirates Group, and top Dubai Airport officials during his tour. Shaikh Ahmed said that the Terminal 2 building, as a whole, will be modernised in stages to meet the urgent needs and the steady increase in the number of passengers through this terminal, especially ‘FlyDubai’ passengers. Shaikh Mohammed also visted the Dubai Airport Free Zone and interacted with employees and shook hands with them. He was briefed by Dr Mohammed Al Zarooni, Director-General of (DAFZA), on the DAFZA’s strategy, which is deemed to be the best destination for free zone companies regionally, a significant contributor to the UAE economy. “The success achieved by the DAFZA is a first step forward for more progress in the way of excellence that we thrive,” he said. He toured a number of facilities and expressed happiness at the development in the DAFZA. He lauded Shaikh Ahmed and his team who are following up to meet the needs of customers and working to attract more companies. DAFZA contributes 2.27 per cent of Dubai’s GDP, and the Vice-President was briefed in figures on the development of the zone since its inception up to 2012, when the volume of investment  reached Dh3.5 billion in comparison to Dh235 million in 1996. The zone now has 15 buildings, with 1,600 companies operating there, including Boeing, Airbus, Mitsubishi, Chanel, Panasonic and others. Al Zarooni also spoke about the local and international awards and certificates won by the DAFZA in the areas of quality, excellence, management, information technology, information security, energy management, health and safety. Expansion of the zone will cost up to Dh260 million, including offices and service facilities, said Al Zarooni. The new building will be completed within two years. (With inputs from Wam) news@khaleejtimes.com Taylor Scott International