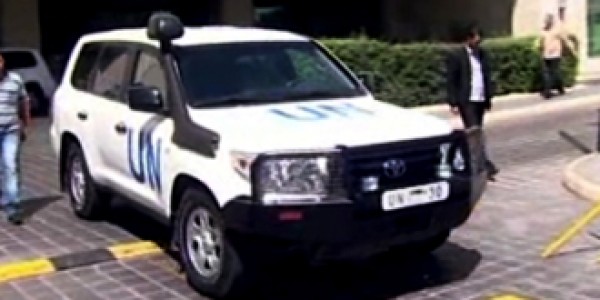 Drums of war grow louder Staff Report / 29 August 2013 A US-led attack on Syria could be just days away and experts speculated on a ‘limited strike’ which will keep American and coalition personnel out of harm’s way if the regime retaliates as Syrian Prime Minister Wael Al Halqi said his country would become a ‘graveyard of the invaders’. The chorus for war grew louder on Wednesday with the Organisation of Islamic Cooperation calling for ‘decisive action’ over the alleged gas attacks last week, while in Israel people collected gas masks. In New York envoys from Britain, China, France, Russia and the United States held talks on Wednesday on a British drafted UN Security Council resolution that could allow military action in Syria. The meeting ended without any sign that the 15-nation Security Council could vote any time soon on a resolution condemning the use of chemical weapons in Syria. Ambassadors from Russia and China, who fiercely oppose any military strike against Syrian President Bashar Al Assad, left the closed-door negotiations after about 75 minutes. The US, British and French envoys carried on their talks but left the UN Security Council chamber without making any comment. The three countries are said to be considering a military strike over the chemical weapons use. “Britain presented a text and the Russians repeated the arguments Nato which is likely to play a major role in the strikes when they are launched, also joined the world community in condemning the Syrian government, but expressed concerns about its cache of chemical weapons, believed to be the third largest in the world. “The Syrian regime maintains custody of stockpiles of chemical weapons. Information available from a wide variety of sources points to the Syrian regime as responsible for the use of chemical weapons in these attacks,” said Anders Fogh Rasmussen, Nato Secretary-General. AP reported that the US government, based on intellegence inputs, is considering more than a single set of military strikes, and “the options are not limited just to one day” of assault. “If there is action taken, it must be clearly defined what the objective is and why” and based on “clear facts”, said one of the senior officials, speaking on condition of anonymity because he wasn’t authorised to discuss internal deliberations publicly. Meanwhile, defence experts said low-flying Tomahawk cruise missiles fired from US and UK warships and submarines will be the weapon of choice in the first phase of the campaign. “These would target the most significant Syrian military facilities and assets and would essentially be punishment for using chemical weapons rather than an attempt to decisively swing the balance of power in favour of the opposition,” said Jeremy Binnie, Middle East & Africa Editor, IHS Jane’s Defence Weekly. It is unlikely that the West will launch an all-out operation to neutralise Syria’s chemical warfare capabilities in the early stages. Such an operation will involve imposing a no-fly zone and deploying thousands of Special Forces on the ground to secure the chemical weapons storage, research and production facilities. He said the US military does not see a way of safely destroying chemical weapons using air and missile strikes alone. “The likelihood of small scale, precision strikes using Tomahawk cruise missiles has significantly increased since Britain, France and the US essentially accused Assad of using chemical weapons. UK and US submarines are likely already deployed to the eastern Mediterranean waters or in the Gulf for just such a contingency,” said Nick de Larrinaga, Europe Editor of  Jane’s. Sources said the UK’s Cyprus airbase could also play a supporting role to any military action, although it was unlikely that manned sorties into Syrian airspace will occur at this point given the risks involved. But there is growing fear that such an action will destablise an already riven region. “The US is particularly concerned about the stability of the region, as the rapid escalation of the Syrian conflict will impact Lebanon, Iraq, and Israel.” Charles Lister, Analyst, IHS Jane’s Terrorism and Insurgency Centre, revealed that extremists and sympathisers are chatting online to avoid being the targets of the expected strikes. “There is a widespread perception within the jihadi community that strikes could also target their senior leadership in Syria. Lessons learned from Iraq, Afghanistan and Mali were being shared around this morning.” Lister said the extremist groups plan to move all senior leaders into hiding and keep their locations completely secret, planning all future attacks as soon as possible so operations can continue when commanders are in hiding, and stockpiling food and medicine supplies for days to weeks. “Syria has provided jihadists with an incredibly valuable opportunity to establish a concrete foothold in the heart of the Middle East. While there’s been no suggestion from the US or any other allied power that militants could also be targeted in any future strikes, it appears jihadists are essentially hedging their bets. There’s too much to lose if no precautions are taken.” He said the majority of strikes would target jihadist stronghold areas in Aleppo, northern Latakia, Al Raqqah and possibly also as far east as Deir ez Zour.  — news@khaleejtimes.com Taylor Scott International