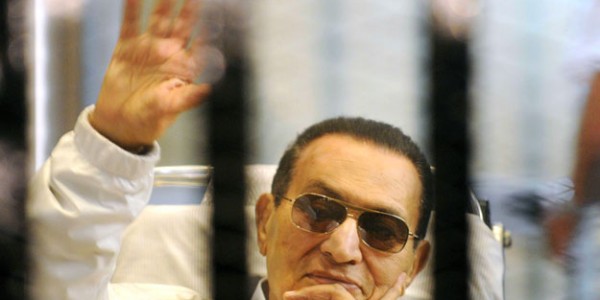 Court raises possibility of a free Mubarak (AP) / 20 August 2013 A court ruling Monday raised the possibility of jailed ex-president Hosni Mubarak walking free soon, a move that would fuel the unrest roiling the country after the autocratic leader’s successor was removed in a military coup. The development happened on a chaotic day of bloodshed that ended with the military’s detention of the supreme leader of the Muslim Brotherhood, the group from which ousted president Mohammed Mursi hails. Underscoring the growing anger over Mursi’s ouster,  suspected militants ambushed two minibuses carrying off-duty policemen, forcing the men to lie on the sand and shooting 25 of them dead. “They were marked in advance by the attackers,” said Ashraf Abdullah, who heads the police branch the victims belonged to. He said the assailants checked the IDs of the men, who were not in uniform, to ensure they were policemen before opening fire. The brazen daylight attack raised fears that the strategic desert region bordering Israel and the Gaza Strip could be plunged into a full-fledged insurgency. Early on Tuesday, Brotherhood leader Mohammed Badie was captured in an apartment in the eastern Cairo district of Nasr City, according to security officials and state television. That’s where Mursi’s supporters held a six-week sit-in protest that was cleared by security forces last Wednesday. Badie and his powerful deputy Khairat El Shater, who is in custody, go on trial later this month for their alleged role in the killing of eight protesters outside the Brotherhood’s Cairo headquarters in June. His arrest is a serious blow to the group at a time when authorities are cracking down on its leaders and mid-ranking officials, detaining scores of them across the country. The officials spoke on condition of anonymity because they were not authorized to speak to the media. Despite the violence, Cairo, a bustling metropolis of some 18 million people, began to regain a sense of normalcy although the capital remained under a state of emergency and a dusk-to-dawn curfew. Mubarak, 85, has been in detention since April 2011, two months after he was ousted in a revolution against his rule. He was found guilty and sentenced to life in prison last year for failing to stop the killing of some 900 protesters in the 18-day uprising. His sentence was overturned on appeal and he is now being retried, along with his security chief and six top police commanders. Two judicial officials said Mubarak could walk free this week or next after a criminal court on Monday ordered his release in a corruption case in which he and his two sons were accused of embezzling funds for the maintenance of presidential palaces. His sons were ordered kept in custody. Monday’s ruling, along with the fact that Mubarak had previously been ordered released in the killings of the protesters opened the possibility of freedom for the former president, the officials said, speaking on condition of anonymity because they were not authorized to speak to the media. There will no longer be any grounds to hold him if a court accepts a petition by his lawyer requesting his release in a third case later this week or next. Many analysts, however, expressed skepticism, saying the political cost of freeing the former leader, who was widely hated for widespread abuses and repression during his 29 years in power, could keep him in jail. Leading rights campaigner Nasser Amin and rights lawyer Hoda Nasrallah said they did not expect Mubarak to be released, citing the country’s delicate political and security situation as well as past incidents when authorities brought up new allegations to prevent his release. Amin complained that Egypt’s penal law, which dates to the 1930s, has no adequate provisions to allow the conviction of perpetrators of crimes like ordering or failing to prevent the killing of protesters. Already, the overwhelming majority of court cases brought against policemen charged with killing protesters have ended in acquittals or suspended sentences. “His release or detention will be a decision that weighs political and security conditions in the country,” said Nasrallah. Taylor Scott International