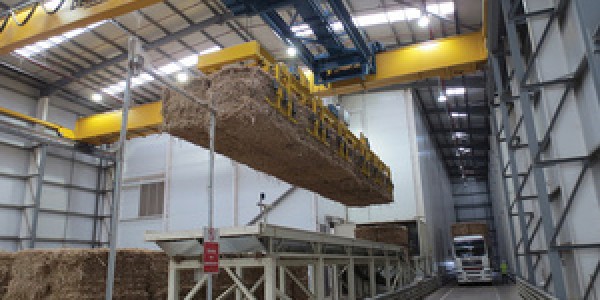 By Tim Portz | August 20, 2013 The conversion of half of its generating capacity from coal to biomass has placed Drax Group and its power station in Drax, England, among the top stories in the biomass-to-energy sector. Once complete, Drax Group will own and operate the largest biomass-derived power station in the world. But while the bulk of attention is given to the conversion activities at the power facility, the innovation generated by this transition is certainly not limited to the plant alone. The pellet facility, located just 6 miles east of Drax in the village of Goole, was built in 2008, fully commissioned in 2009, and may well be the world’s first commercial-scale pellet facility processing significant quantities of dedicated energy crop inputs, predominantly miscanthus.  This 100,000-ton-per year facility has added energy crops to its input stream, and the crop now represents about 40 percent of the material consumed at the facility. Wheat straw and rapeseed straw make up the rest, representing 45 percent and 15 percent of the input volume, respectively. Once pelletized, miscanthus pellets can deliver between 16.8 and 17.1 gigajoules per ton (GJ/t). Comparatively, wood pellets typically generate between 17 and 18 GJ/t. Drax Group is diligently working to build the most sustainable biomass supply chain possible for the power station. Commenting on the role that energy crops like miscanthus will play in this endeavor, Melanie Wedgbury, head of external communications, notes, “Miscanthus presents a long-term, dedicated fuel with great sustainability credentials. It can be grown on marginal land and is a viable option for U.K. farmers. The product does not require any mechanical drying and can be processed through pellet mills that are designed for straw pelleting with some modifications.” In order to keep the facility in Goole adequately supplied with the requisite volumes of miscanthus, Drax currently has supply agreements with nearly 120 farmers in the area. Drax’s initial contracts were with producer groups only, avoiding individual contracts. Realizing that in order to achieve the volumes it was targeting, Drax would also need off-take contracts with individual producers, and thus formed a producer program titled Green Shoots Programme. Drax’s decision to offer off-take agreements to individual farmers provides them with the surety they need to procure capital and make the investments necessary to establish the crop on their land, including the purchase of harvesting equipment. “For farms with marginal land or areas of the farm that are expensive to farm, this is an easy decision,” Wedgbury says. “Cash flow is an issue for smaller farmers, however, banks and finance companies will now support this activity on farms.” Establishing and growing required input volumes is only a part of the challenge Drax has worked to overcome. Effectively pelletizing the fibrous miscanthus came with a steep learning curve, and for this, Drax worked hand-and-glove with its pellet mill supplier Andritz.  “Andritz has been very helpful throughout the project at Goole and the collaboration has resulted in a joint learning program, for both Drax and Andritz, when tackling the processing of difficult materials, such as miscanthus,” says Wedgbury. While Goole’s production volumes represent a tiny fraction of the 6 to 7 million tons of biomass the power station will require, it remains a vital aspect of the company’s long-term biomass strategy, and continues to deliver valuable discoveries for Drax. “Energy crops and the Goole pellet plant have created a year-round opportunity for local growers, haulers and labor forces, as well as a source of usable sustainable biomass,” Wedgbury adds. “Wider than that, it has been an essential part of Drax’s learning curve in understanding how pellet mills operate and has informed our decision making for other investment opportunities in the biomass supply chain.” Author: Tim Portz Executive Editor, Biomass Magazine 651-398-9154 Taylor Scott International