Can Crop Prices Keep Pace With The Cost Of Ag Land? 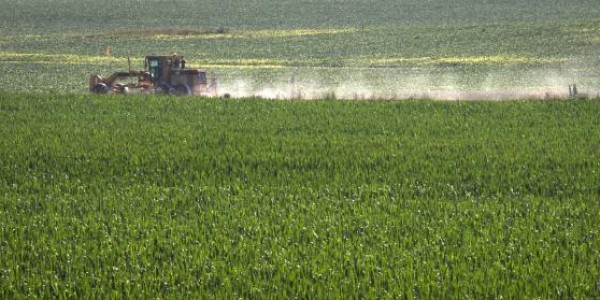 By John Fitzgerald | 08/27/13 REUTERS/Adrees Latif High corn and soybean prices have farmers plowing their cash back into land, which is driving land prices up. There’s an interesting quote in Julie Buntjer’s story in the Worthington Daily Globe about some Nobles County farm land that sold for a county-record $13,000 per acre. The land is good farm land and there were a lot of bidders, said Steve Prins of Prins-Sliver Auction Services. A Sibley, Iowa, buyer got the 156.8-acre parcel for a total of $2,038,400, which went to the heirs of Ella Mae Sall. Prins said high corn and soybean prices have farmers plowing their cash back into land, which is driving land prices up. Prins says he has a long list of people willing to pay almost any price for land. Ag prices have “been good for the past few years and that’s the reason they can afford to pay these prices,” Prins said. Here’s the interesting quote: “W e hope that the farming industry continues to be good.” Yup, that’s the key because when the prices aren’t so good … Per Peterson at the Marshall Independent picks up on some state Department of Natural Resources statistics about last year’s pheasant and duck harvests. The number of pheasant and duck hunters increased 8 percent, he reported — in 2012, an estimated 84,000 people hunted pheasants, and 90,400 hunted ducks. “Although ruffed grouse are on the downward side of their 10-year population cycle, the number of grouse hunters increased 6 percent in 2012 to 97,200, the DNR said. Statewide estimates show that hunters harvested 264,000 pheasants, 835,000 ducks and 355,000 ruffed grouse,” Peterson wrote. Here’s the first paragraph in a story in the Fargo Forum : “A Moorhead man was sentenced to almost a year in jail after pleading guilty to child endangerment and drunken driving charges after police say he drove his daughters at speeds up to 100 mph, drinking beers he had them open for him .” When a deputy stopped Thomas Eugene Iverson, 48, his 12-year-old twin daughters said their father had been driving between 90 and 100 mph, that Iverson had been having them open his beers for him, and one of the girls told the deputy she’d pretended to throw up to try to get her father to slow down. Meanwhile, down in Worthington, eighth-graders are all being kitted out with iPads. So reports the Globe’s Ryan  McGaughey . Seventh-graders will get them today. Fifth-and sixth-graders get them next week, third- and fourth-graders a day or two after that. While students and teachers take to the devices intuitively, simply inventorying each iPad and getting them up on a network that will filter web pages was a monumental task , said the district’s technology director, Amy Ernst. No detail in the story about how much the iPads cost, where the money came from or why the district felt the need to outfit students as young as 8 with iPads. No doubt they felt it was one of those “21st century” things to do. The Willmar city utility company is warning of a phone scam where customers are told their electricity will be cut off unless they wire money to the scammer, reports David Little of the West Central Tribune . The utility does not use money wiring or disconnect power without going through the proper process. Call Willmar Municipal Utilities at 320-235-4422 to verify any call made about disconnection. OK, here we go down the rabbit hole in a story by Tom Olsen of the Duluth News Tribune : Marcus Michael Linky, 22, is a felon – convicted of third-degree burglary in 2011 – which means he can’t own a gun. Police were called to a house near his residence on a report of a fight. They didn’t find a fight, but they did see a long-haired man step outside an apartment building holding a rifle. Police drew their weapons and ordered the man to drop the rifle, which the man did and then ran back into the building. Police found the rifle and, with the help of another resident, identified the rifle as belonging to Linky. Officers got permission to enter Linky’s apartment and found him in bed with a bad haircut and remnants of hair on his chest and back. They also found clothing similar to the clothes worn by the long-haired man who was seen throwing the rifle. Later, Linky said he cut his hair about a week earlier but had not showered since, which is why he had hair on his shoulders and chest. He admitted to handling the firearm but said he knew he could not purchase it because he is prohibited from handling or possessing firearms, according to the complaint. Linky’s next court appearance is scheduled for Sept. 18. Taylor Scott International