Call to cut power, water use 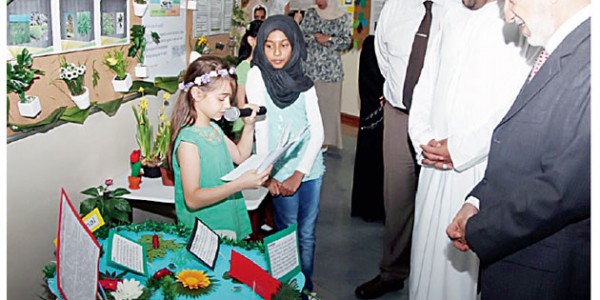 Call to cut power, water use Salah Al Deberky / 23 April 2013 “We are, to a great extent, responsible for the rise in gas emissions causing global warming, due to excessive exploitation of resources and irrational practices,” the Minister of Environment and Water, Dr Rashid Ahmed bin Fahd said. He noted that the household sector in the UAE alone consumes about 37 per cent of power energy and 27 per cent of water, a large rate which could be slashed through simple practices. He was speaking during the Earth Day celebrations held at the Dubai National School, Al Barsha, on Monday. The occasion focused on climate change and its adverse impacts on human and animal life as well as the different eco-systems. Bin Fahd said that the issue of climate change had gained global attention in the last two decades. “Hundreds of conferences and gatherings are being held, and hundreds of international reports are being issued warning people of its effects,” he said. “Global warming is, in fact, a natural and necessary phenomenon for the continuity of life on earth, yet delay in curbing it has led to what is known as the change of climate leading to a rise in temperature,” he said adding that it had very dangerous repercussions on life. Several natural calamities witnessed in different parts of the world are attributed to the change in climate he said. Bin Fahd enumerated the efforts taken by the UAE in curbing the phenomenon. The government had made huge financial investments among which, is adopting the option of renewable energy, nuclear energy for peaceful purposes and using the produced energy for sea water desalination, water treatment, and other purposes instead of using oil and gas. By 2020, the renewable and nuclear energy are expected to meet one third of our needs for energy, thereby  reducing emissions of global warming gases, he said. The UAE has also pursued the green building approach by implementing standards in building construction in a way that ensures maximum saving of energy, water and other resources. He stressed his confidence in students saying that they are the hope of the future. He said he looked forward to seeing their sense of awareness on practical issues and lifestyle, as it is the optimal way for conserving the environment to make it a safe place to live. news@khaleejtimes.com Taylor Scott International