Call for balance between growth and environment 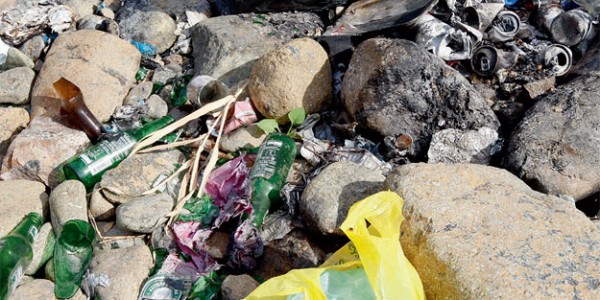 Call for balance between growth and environment Silvia Radan / 6 June 2013 The UAE is a land of rich beauty, but its environmental challenges, linked to those in the rest of the world, severely threaten nature in all forms. To mark World Environment Day, the Emirates Centre for Strategic Studies and Research invited Dr. Terrence Pierson to talk about the UAE’s environmental successes and challenges. Pollution is a big worry when it comes to environmental challenges. Waste left by tourists at Wadi Wurayah. — KT file photo Dr. Pierson is the vice-president of Global Climate Change and Environmental Sciences at the USA’s RTI International, an independent, non-profit institute that provides research, development, and technical services to government and commercial clients worldwide. “What a beautiful country you have,” he said. Exceptional habitats in mountainous areas; shifting sand dune formations in Liwa; wildlife rich swamps such as Al Wathba where a record 39 flamingo chicks were born this spring; protected islands  where endangered species such as the osprey and the dugong are thriving; and hardy coral reefs are all  environmental treasures that need to be preserved, he said. The reefs were adapted to extreme sea water temperatures, which would become increasingly important as elsewhere coral reefs died out due to increased sea temperatures caused by climate change. However, there were quite a few environmental challenges standing in the way, Dr Pierson said. One of them was the increase of life-threatening carbon dioxide pollution, waste production, and water and energy consumption, all caused by the increase in living standards. “The number of urban developments between 2007 and 2012 increased by 300 per cent,” Dr Pierson said. In 2012, Environment Agency – Abu Dhabi (EAD) alone had 383 infrastructure projects on its table, awaiting approval. Economic growth was important, but Dr Pierson warned the country needed a balance between growth and environmental protection if it was to have a future. In the past decades worldwide natural disasters such as earthquakes, tsunamis, tornados, floods and extreme weather patterns that affected the UAE as well, have indicated signs of climate change. Pollution is one of the big worries when it comes to environmental challenges, and health, and Abu Dhabi has plenty of it. “Measurements done by EAD showed the PM10 (pollution) in Abu Dhabi between 129 ppm and 203 ppm annually, while the World Health Organisation standard is only 20 micrograms per cubic meter,” revealed Dr. Pierson. PM stands for particular matter, meaning the amount of solid and liquid particles found in the air, and PM10, measured in parts per million or ppm, refers to the big particles that are between 2.5 and 10 micrometers. They are caused by natural elements such as dust, but also by all kinds of man-made pollution such as fumes from petrol or waste burning. “High levels of PM10 can cause diseases such as lung cancer,” warned Dr Pierson. “In the UAE, the high level PM10 comes mostly from dust, and most international studies for PM10 are based on carbon levels, not dust,” he added. Greenhouse Gases (GHG), which include water vapour, carbon dioxide, methane, nitrous oxide and ozone, greatly affect the temperature. Without them, the planet’s average temperature would be about 33 degrees colder. But since the 1900s, when industries took over the developed world, one particular GHG, carbon dioxide, has increased to 400 ppm due to fossil fuels burning. “In the UAE, carbon dioxide accounts for 79 per cent of all GHG emissions,” said Dr. Pierson. “GHG increased emissions will lead to many environmental challenges. One of them is the sea level rising, which is a big concern here in UAE, because of coastal developments,” he added. In fact, the energy sector is responsible for 72.6 per cent of direct GHG emissions, followed by waste at 6.9 per cent, agriculture at 4 per cent and industrial processes at 1 per cent. Saving energy has become almost synonymous with more efficient air conditioning, since over 60 per cent of total electricity used in Abu Dhabi emirate is from air conditioning. Water quality — and consumption — as well as waste management are also major environmental challenges that are also affected by the UAE’s growing population and higher living standards. silvia@khaleejtimes.com Taylor Scott International