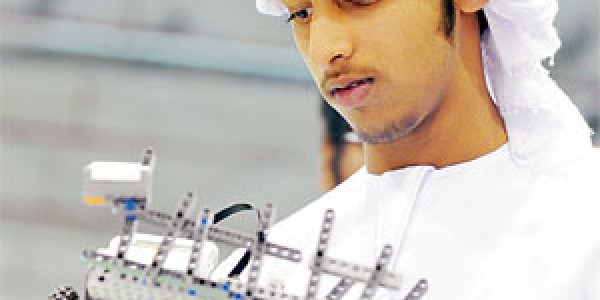 Building a smart, intelligent robot Staff Reporter / 23 May 2013 This year’s World Robot Olympiad (WRO) national competition officially opened on Wednesday in Abu Dhabi and Al Ain schools. The 2013 robotics competition is being held by the Abu Dhabi Education Council (Adec) in partnership with the Abu Dhabi Centre for Technical and Vocational Education and Training (ACTVET). Over 1,500 public and private school students from across the UAE are expected to participate and hope to represent the UAE at the international level which will be held in Indonesia from November 15 to 17. Working under the theme ‘World Heritage’, the district competition will run till May 31. Out of the 379 teams, 18 of the best performing students from each district will be shortlisted for the UAE finals. The regular category competitions will be held on May 31 while the open and football categories will be held on June 1. District teams will consist of the best three under-13 years olds; best three under-16 years olds and best three under-20 year olds in the regular category; and best five across all age groups in the open category and finally best four in football. “Adec has been assigned since 2008 to organise the national WRO qualifying competition for all the students in the UAE, which is why with each passing year we add more features to the competition,” said Dr Najla Alraway Alnaqbi, Educational Technology expert and e-Learning manager at Adec. “This year’s national qualifying competition has spread out in various ways, we are basically bringing the competition to students, each student will be provided with a venue, instead of having them travelling for two to three hours to compete,” she added. WRO is the largest international robotic competition for students who compete in teams to assemble robots that will participate in challenges to solve a specific problem. The WRO platform allows young students to learn and apply their knowledge in science, engineering, maths and computer programming to build an intelligent robot. olivia@khaleejtimes.com Taylor Scott International