Britain says ‘no’ but US ready to act alone on Syria 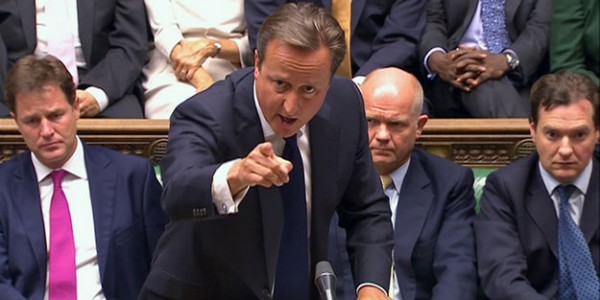 Britain says ‘no’ but US ready to act alone on Syria (AFP) / 30 August 2013 British lawmakers rejected their government’s call for punitive military strikes against the chemical-armed Syrian regime on Thursday, leaving the United States to act alone. Before and after the shock House of Commons vote to defy Prime Minister David Cameron’s bid to win support for military intervention, the White House said America was ready to take unilateral action. Britain’s Prime Minister David Cameron is seen addressing the House of Commons in this still image taken from video in London. – Reuters   “We have seen the result of the Parliament vote in the UK tonight,” said Caitlin Hayden , a National Security Council spokeswoman. “As we’ve said, President Obama’s decision-making will be guided by what is in the best interests of the United States. “He believes that there are core interests at stake for the United States and that countries who violate international norms regarding chemical weapons need to be held accountable.” The decision also came after the failure of an improbable eleventh-hour effort by British diplomats to win UN backing for action against Bashar Al Assad’s regime at a meeting of the permanent members of the Security Council. “It is clear to me that the British parliament, reflecting the views of the British people, does not want to see British military action. I get that and the government will act accordingly,” Cameron said. Britain’s opposition Labour leader Ed Miliband is seen addressing the House of Commons in this still image taken from video in London. – Reuters That, combined with deadlock at the United Nations, appeared to effectively sound the death knell for the idea of a broad-based Western military coalition, although other American allies might still participate. But even before the surprise British vote, the White House had signalled that it was ready to act regardless of UN or allied support. “We certainly are interested in engaging with the global international community on this issue,” White House spokesman Josh Earnest said. “But at the same time, the president’s chief accountability is to the American people that he was elected to protect. “The president believes strongly in making the kinds of decisions and taking the kinds of steps that are necessary to protect our core national security interests that we’ve acknowledged are at stake in this situation.” Earlier, envoys from the permanent five members of the UN Security Council — Britain, China, France, Russia and the United States — had met at UN headquarters in New York. The 45-minute meeting was the second since Britain proposed a draft resolution to permit “all necessary measures” to protect Syrian civilians after a suspected chemical weapons attack last week. But none of the envoys commented as they left. Earlier in the week reports had suggested that a Western strike was imminent, but questions have been raised about the quality of the intelligence linking Assad to the attack. The White House reached out to US lawmakers, with the president’s top aides briefing congressional leaders in a 90 minute conference call. Some members of Congress voiced support for limited, surgical strikes, while urging the administration to continue consulting closely with the Congress. Nancy Pelosi , the minority leader in the House, said she agreed with House Speaker John Boehner that “there needs to be more consultation with all members of Congress and additional transparency into the decision making process and timing, and that the case needs to be made to the American people. “It is clear that the American people are weary of war. However, Assad gassing his own people is an issue of our national security, regional stability and global security. We must be clear that the United States rejects the use of chemical weapons by Assad or any other regime,” she said. US warships armed with scores of cruise missiles are converging on the eastern Mediterranean, and US military officials have said they are ready to launch a powerful barrage against regime targets in Syria. Assad’s ally Russia has blocked all attempts to toughen international sanctions against Damascus or authorise outside force to punish or unseat the regime. Syria, meanwhile, is in the 29 th month of a vicious civil war in which more than 100,000 people are credibly reported to have died. As the stand-off continues, a team of UN inspectors are investigating reports that last week’s gas attack outside Damascus killed more than 350 people, including women and children. A UN spokesman said Thursday that the team had collected “considerable” evidence and will brief UN secretary general Ban Ki-moon soon after they leave Syria on Saturday. “Starting tomorrow he will try to reach out to member states and take discussions forward on the question of what is happening in Syria,” the spokesman said. Ban has appealed for the inspectors to be allowed to complete their work before the major powers decide any follow-up action. Assad remained defiant in the face of the Western threats. “Syria will defend itself in the face of any aggression,” state television cited him as telling a visiting delegation of Yemeni politicians. He vowed that any attack would result in “victory” for the Syrian people. His regime has denied using chemical weapons and blamed “terrorist” rebels. The mood among Damascus residents was fearful, while security forces prepared for possible air attacks by pulling back soldiers from potential targets and introducing tougher controls at roadblocks and hospitals. Taylor Scott International