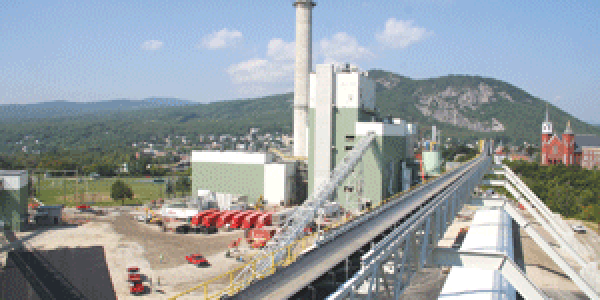 Published Date: Tuesday, 27 August 2013 By Barbara Tetreault BERLIN — The Burgess BioPower plant hit a new milestone last week with the first delivery of wood as the facility advances through its testing and commissioning stage. Cate Street Capital vice president Alexandra Ritchie said the 75-megawatt biomass plant is scheduled to come on-line by the end of the year. Part of the wood processing structure for the Burgess BioPower biomass plant is this steel A-frame conveyor that sits about 60 feet high. Burgess BioPower has a 20-year purchase power agreement with Public Service of New Hampshire. Last Wednesday there were 398 people employed on site, down from the over 500 employed during the peak of construction. Ritchie said the construction phase is winding down as Cate Street hopes to get the plant operating by late November. She said the construction phase originally was projected to take 25.5 months but will probably end up taking closer to 27 months. On hand to witness the wood delivery were the state’s top energy officials participating in a tour arranged by state Senator Jeff Woodburn. Meredith Hatfield, director of the state Office of Energy Planning, Karen Cramton, deputy director of OEP, and Molly Connors, Gov. Maggie Hassan’s energy adviser along with Rob Riley and Jessica O’Hare of the Northern Forest Center spent about an hour walking the site and climbing to the top of the overhead conveyor for the plant’s wood handling system. Ritchie said the project has already had a significant impact on the local economy. She said the unions involved have worked hard to hire local people for the project. Site manager Carl Belanger estimated as many as half those hired were from the North Country. In addition, Ritchie said local hotels and food establishments have benefited from workers brought into the area to work on the project. Once the plant is operating, it will employ 30 to 40 people. Ritchie said Delta Power Services, which will operate and maintain the biomass plant under a six-year contract with Cate Street Capital, has already hired the majority of those full-time employees. Training for new employees is being done at White Mountains Community College. Beyond those hired directly, she said the project should stimulate hundreds of jobs in the wood products industry through the purchase of 750,000 tons of biomass annually. Ritchie said Cate Street Capital has a 20-year agreement to sell the power generated the plant to Public Service of N.H. which should provide security to logging contractors. Ritchie told the group the biomass plant is Cate Street Capital’s flagship project. “It is a project we are very proud of because of what it means to the area,” she said. Belanger explained the wood processing system for the plant. Truck dumpsters tilt the logging trucks and dump the biomass onto a reclaim conveyor, which transports the wood into the wood processing structure where it is screened and ground. The ground biomass is then fed into an A-frame conveyor that moves back and forth, depositing the wood in a pile under the conveyor. Under conveyors feed the biomass into a transfer conveyor that goes into the main boiler feed conveyor. The tour also went into the turbine building where the 265,000-pound turbine is housed. Ritchie called the turbine the most critical part of the facility and reported that Cate Street Capital actually ordered the turbine before it had final approval for the project because of the lead time involved. The turbine was built in Japan by Fiji and its delivery to Berlin last December was a major undertaking. Belanger also pointed out the bag house — called that because it contains 4,000 filter bags that screen out dust and particulates. A catalyst removes nitric oxide gas. A cooling tower cools the water from the turbine to allow its reuse. The plant will pull water from the city’s system to replace that lost in vaporization. Paving is under way at the site, and Ritchie said Cate Street Capital will also put in a community parking lot near Community Field as part of the public benefit of the project. The highpoint of the tour was to watch the first wood delivery. A load of wood chips harvested at a site in Canaan, Vt., was delivered by Hicks Logging of Jefferson. As the truck dumpster tilted the logging truck, biomass workers could be seen taking pictures of the wood chips emptying out. Taylor Scott International