Australia, US and Russia top at Fina world junior 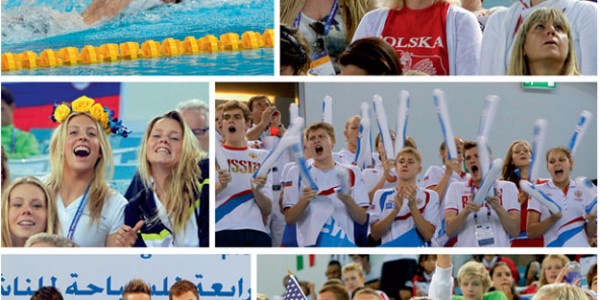 Australia, US and Russia top at Fina world junior Moni Mathews / 1 September 2013 The 4th Fina World Junior Swimming Championships at the iconic Hamdan bin Mohammed bin Rashid Sports Complex off the Emirates Highway (formerly Dubai Bypass Road) came to a close after a simple closing ceremony depicting the traditions and culture of the UAE, on Saturday night. The concluding day of 4th Fina World Junior Swimming Championship drew a large number of fans as the swimmers competed fiercely. — KT photos by Mukesh Kamal Australia were the dominant ‘gold club’ team with eight going into the final day with the US and Russia giving a close fight. Golden boy Mack Horton, the freestyle specialist, was the toast of the Down Under contingent with a four-gold haul before he took part in his pet 1,500m on the final day, which he won in championship time on Saturday night. The UAE swimmers, mainly in it for the exposure and the experience to be competing against the best juniors in the world, came off better after spirited shows in the heats and qualifiers held in the mornings of the 6-day event which had nearly 800 swimmers taking part. The highlight of the championships was the participation of the senior Fina world 50m and 100m record holder, and world and Olympic 100m gold medallist, Ruta Meilutyte of Lithuania who took part in eight of the nine events she was scheduled for in Dubai. The event was for the 15-18 years category in the boys section while in the girls action, the best of talent from around the world in the 14-17 age group took part in the fiercely contested heats, semi-finals and finals. moni@khaleejtimes.com Taylor Scott International