ANALYST: We Are Seeing A Farm Bubble In The Corn Belt 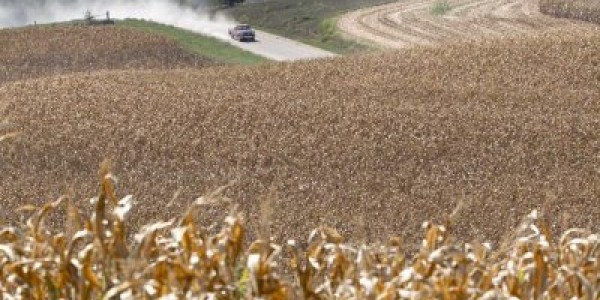 MAMTA BADKAR JUN. 10, 2013 AP/Nati Harnik National farm values appear to be overpriced but not in a bubble, according to Paul Ashworth at Capital Economics. Prices are up 10% in the last year, and have been up 25% over the past three years. But he does see a “localized bubble in farmland values in the corn belt,” considering the biggest gains in farmland values have been among the largest corn and wheat producers: “Near-zero interest rates have undoubtedly played some role in this, but the bigger factor has been the surge in corn and wheat prices over the past decade. “We do not believe that a bursting of this bubble would have any systemic risks for the wider financial system. Nevertheless, a slump in farmland prices in the corn belt could hit some small community banks very hard and it would be devastating for the farmers involved.” Prices have risen by over 50% in prices in the northern plains (Kansas, Nebraska, North and South Dakota) and the corn belt (Illinois, Indiana, Iowa, Missouri and Ohio). In Nebraska prices have nearly doubled over the past three years and Iowa prices are up over 80%. The rising price of corn and wheat explain the rise in prime crop land values. But ranch prices haven’t moved along with livestock prices, and this is because livestock prices were pushed up by rising feed costs. Ashworth also points out that farmland values could be driven by the shale revolution. Capital Economics A closer look at Iowa Iowa’s farmland is overvalued relative to national value of farm production, writes Ashworth. That ratio is almost double the long-run average suggesting that farmland is overvalued by as much as 100%. But this isn’t an apples to apples comparison. From Aswhorth: “Comparing Iowa farmland with the national value of farm production is, however, unfair. Unfortunately, we don’t have figures for Iowa State farm production values. But since Iowa farmland is predominantly used to grow corn, we can compare it to corn prices, although we need to adjust for rising yields. (We used a 10-year average of corn yields to smooth out temporary drought-related slumps.) This ratio suggests that Iowa farmland is a more modest 40% overvalued. “Even then, however, we have used the 2012 end-year price of around $6.50 per bushel. Corn is now fetching around $5.50 per bushel, which would suggest that Iowa farmland is nearer to 70% overvalued. The bottom line is that Iowa farmland is markedly overvalued, unless you believe that corn prices will rebound back to recent highs. “Compared with cash rents for farmland, however, Iowa farmland values don’t look nearly as overvalued. Data from Iowa State University show that cash rents for Iowa farmland surged to $252 per acre in 2012, up from $183 in 2009. Using those cash rent rates and farmland values, we can calculate a yield for Iowa farmland. As Chart 12 shows, that yield has fallen from about 6% a decade ago to 3% in 2012. Given the even bigger decline in long-term Treasury yields over that time period, the decline in Iowa farmland yields seems reasonable.” The good news is that the demand for farmland loans is decreasing, and only 0.7% of farmland loans are seriously delinquent. And though a collapse in farmland value would hurt small community banks, these loans don’t make up a huge part of banks’ balance sheets and therefore don’t post a systemic risk to the financial system.” Read more: http://www.businessi…6#ixzz2W1hLcv8z Taylor Scott International