Adihex: Culture and heritage on exhibit 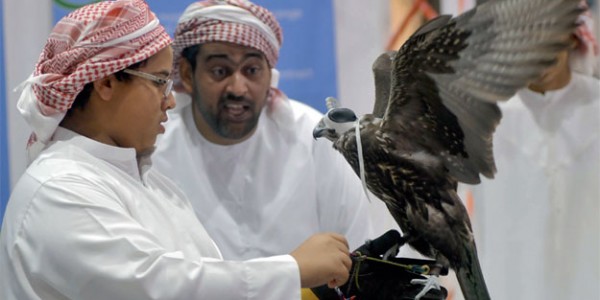 Adihex: Culture and heritage on exhibit Silvia Radan / 5 September 2013 With no pomp, no ribbon cutting, the 11th Abu Dhabi International Hunting and Equestrian Exhibition (Adihex) opened its doors at 11am on Wednesday morning. For the next three days, until September 7, 39,000 square meters of the Abu Dhabi National Exhibition Centre is being taken by 600 national and international organisations promoting the widest variety of products and services related to outdoor camping, hunting, falconry, horse riding and Arab culture and heritage. “The Adihex is one of the most important annual events of its kind, dedicated to the preservation of culture and heritage. We continuously aim to achieve greater success year after year, especially since Adihex is the only exhibition specialised in the culture and heritage in the Gulf region, and as such maintaining success is surely more difficult than just achieving it,” declared Mohammed Khalaf Al Mazrouei, chairman of adihex Higher Organising Committee and Culture and Heritage advisor at the Abu Dhabi Crown Prince Court. An instant eye catcher at the exhibition is Abu Dhabi Tourism and Culture Authority’s (ADTCA) pavilion, the biggest of them all. “We are as big as last year, over 1,200 square metres,” said Saeed Al Kaabi, manager of traditional productions at ADTCA and in charge of the pavilion. “The concept is inspired by the Qasr Al Hosn, Abu Dhabi’s oldest fort. The architecture of the old walls is reproduced here, at a smaller scale, of course. Inside, we have about 40 Emirati traditional handicrafts and activities represented. We have a coffee shop offering free Arabic coffee, tea and dates; a souk where handicraft makers supported by ADTCA sell their products; a corner where Emirati ladies demonstrate the art of saddu and tally; a VIP majlis designed in the style of an old Emirati house…. We have falconry and from 4pm till closing time at 10pm we have Emirati folklore,” Al Kaabi told Khaleej Times. The ADTCA pavilion is also the host of the Arabic Coffee competition, which this year will give away Dh50,000 in prizes in several age and gender related categories. “So far we have about 30 people registered in the competition, but we never close the registration. Sometimes, a person comes just as the competition is about to start and enters it,” explained Al Kaabi. It is close to never that a non-Emirati dares to enter such a local competition, but so far this year an Egyptian national is challenging a few dozen Abu Dhabi Bedouins at Arabic coffee brewing. Coastal traditions are represented too with a full size dhow boat and several miniature ones. Their makers sit next to them, singing sea tunes from the past while making fishing nets. “I made this boat four years ago and my friend here, Khalifa Khamis Ismail made the miniature boats. Dhows are always made by the sea and in Abu Dhabi we still have a workshop in Al Bateen, part of the Emirates Heritage Club,” said Saif Al Benghazi. Since Adihex began 11 years ago as a wild falcon preservation project, getting falconers to give up their wild birds and go for farm bred ones instead, environmental issues are still big at the exhibition today. “This year we focus our presence at Adihex on falconry, so we promote the Falcon Hospital and our falconry research project in Mongolia, which we started in 2010,” said Razan Khalifa Al Mubarak, secretary general of Environment Agency – Abu Dhabi. The Abu Dhabi Falcon Hospital plays a major role at Adihex, as it sets up a clinic where all falcon buyers may check the birds prior to purchase, free of charge, to make sure they are not getting a sick falcon. Since the hospital also has a pet and animal rescue centre, it brings here some of its rescued cats and dogs, ready for adoption. “It’s amazing! In the first hour of the opening we had one dog and two cats adopted, as well as four falcons for checkup. Last year, the adoption didn’t start until the last two days of Adihex,” revealed Dr Margit Muller, director of Abu Dhabi Falcon Hospital. Adihex has prepared a full programme of shows from 5pm till 8pm that includes a short film on Adihex and equestrian, birds and camel shows, which will repeat every evening of the exhibition. silvia@khaleejtimes.com Taylor Scott International