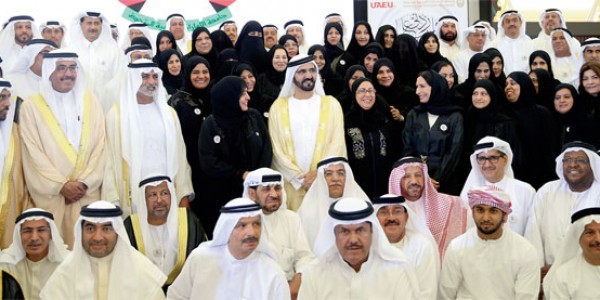 436 students graduate from UAE University (Wam) / 6 June 2013 His Highness Shaikh Mohammed bin Rashid Al Maktoum, Vice-President and Prime Minister of the UAE and Ruler of Dubai, on Wednesday attended the graduation ceremony of the 32nd batch of the UAE University (UAEU) students, held on the university campus in Al Ain. Shaikh Mohammed, Shaikh Nahyan bin Mubarak, Mariam Al Roumi, Minister of Social Affairs, senior officials and faculty members with the graduating students during the graduation ceremony at UAE University in Al Ain on Wednesday. — Wam The ceremony was held under the patronage of the President, His Highness Shaikh Khalifa bin Zayed Al Nahyan. It was also attended by Crown Princes Shaikh Sultan bin Mohammed Al Qasimi of Sharjah, Shaikh Mohammed bin Saud bin Saqr Al Qasimi of Ras Al Khaimah, Shaikh Mohammed bin Hamed Al Sharqi of Fujairah, Shaikh Rashid bin Saud bin Rashid Al Mualla of Umm Al Quwain, and Shaikh Ammar bin Humaid Al Nuaimi of Ajman. Also present were a number of Shaikhs, Ministers, directors of universities and colleges in the state, members of the diplomatic corps and parents of the 436 graduates from various scientific disciplines, 69 of whom obtained Masters and Doctoral degrees. Courtesy: Youtube.com/Sheikhmohammed.ae Shaikh Mohammed, along with Shaikh Nahyan bin Mubarak Al Nahyan, Minister of Culture, Youth and Community Development and Dr. Ali Rashid Al Nuaimi, Vice-Chancellor of UAEU, distributed certificates to graduates of the Faculty of Humanities and Social Sciences (FHSS), as well as the Faculties of Science, Administration and Economics, Law, Food and Agriculture and the Colleges of Engineering and Information Technology, and Medicine and Health Sciences (CMHS), who all swore an oath before Shaikh Mohammed and other attendees. Shaikh Mohammed also distributed certificates to students who obtained Masters and Doctoral Degrees and congratulated them. He wished them success in their lives and expressed his confidence that they will be the future leaders in both government and non-governmental institutions. He praised the scientific and technical levels of the university, especially noting the efforts of Shaikh Nahyan, who gave his time and effort to higher educational institutions, saying he was a model of sincerity in his work of service to the nation and its people. Shaikh Mohammed also wished Shaikh Hamdan bin Mubarak Al Nahyan, Minister of Higher Education and Scientific Research, success in his new assignments, stressing his competence and ability in carrying out the national duty with responsibility and efficiency. In his speech, Shaikh Nahyan thanked Shaikh Khalifa for his continuous support to the UAEU for it to always be a centre for enlightening and preparing graduates who occupy many of the top positions in the state. He expressed his thanks and appreciation to Shaikh Mohammed for his generous sponsorship of the university and support for its graduates and his keen interest in attending the graduation ceremony. Shaikh Nahyan also thanked General Shaikh Mohammed bin Zayed Al Nahyan, Crown Prince of Abu Dhabi and Deputy Supreme Commander of the UAE Armed Forces, for his follow-up on the progress of the university, bringing it into the ranks of global universities. Shaikh Nahyan pointed out that the university has a worldwide reputation, and provides all means of success to citizens. Taylor Scott International