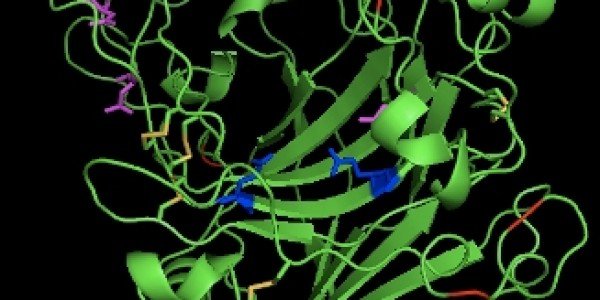 Published on May 16, 2013 at 5:01 AM The production of biofuels from lignocellulosic biomass would benefit on several levels if carried out at temperatures between 65 and 70 degrees Celsius. Researchers with the Energy Biosciences Institute (EBI) have employed a promising technique for improving the ability of enzymes that break cellulose down into fermentable sugars to operate in this temperature range. Energy Biosciences Institute researchers substantially improved the thermal stability of Trichoderma reesei EGI, an enzyme that catalyzes the hydrolysis of cellulose, through a technique called “B-factor guided mutagenesis.” Using this technique, they successfully engineered a high-temperature enzyme variant with greater activity and stability over the desired temperature range, and have shown that not all microbes are alike when it comes to making enzymes with improved properties. The EBI research team, which includes Douglas Clark and Harvey Blanch, who hold joint appointments with Berkeley Lab’s Physical Biosciences Division and UC Berkeley’s Chemical and Biomolecular Engineering Department, and postdoctoral researcher Harshal Chokhawala, used a strategy they call “B-factor guided mutagenesis.” They used it to enhance the thermal stability of TrEGI, an endoglucanase enzyme produced by Trichoderma reesei, a fungus considered to be the gold standard for secreting cellulase enzymes. “Lignocellulose hydrolysis using cellulases at high temperatures offers several potential advantages, including higher solid loadings due to reduced viscosity, lower risk of microbial contamination, greater compatibility with high temperature pretreatments, enhanced mass transfer and faster rates of hydrolysis,” Clark says. “However, T.reesei cellulases are not very stable at temperatures above 50 degrees Celsius. We’ve shown that we can improve the thermal stability of T.reesei cellulases with the B-factor approach.” Like all proteins, cellulase enzymes are comprised of chains of individual amino acids that are linked together into uniquely shaped structures. Every amino acid in a given enzyme has a “B-factor” value that corresponds to the flexibility of that amino acid. The higher the B-factor value, the greater the amino acid’s flexibility. “Just like the loosest knots in a rope will unravel first, the most flexible amino acids in an enzyme are the most likely to fall out of place when the protein is thermally stressed,” Clark says. “Tightening up these portions of the enzyme by mutating the amino acids and decreasing their B factor values represents one way to shore up the structure and increase the thermal stability of the protein.” In a presentation at the recent American Chemical Society national meeting in New Orleans, Clark described how he and his colleagues screened some 11,000 mutant versions of TrEGI then used a heat treatment at 50 degrees Celsius to identify some 500 variant candidates. Applying the B-factor guided mutagenesis, they engineered a TrEGI that was up to twice as active on insoluble lignocellulosic substrates as the native enzyme at temperatures ranging from 50-65 degrees Celsius. Engineered TrEGI expressed in the model fungus Neurospora crassa was able to hydrolyze lignocellulosic biomass at 60 degrees Celsius as efficiently as the native TrEGI at 50 degrees Celsius. By comparison, TrEGI mutants expressed in extracts of Escherichia coli or in the model yeast Saccharomyces cerevisiae had much lower activity at the higher temperatures. “Our results demonstrate that the host used for recombinant cellulase production can have a profound impact on the activity and stability of the expressed enzyme, which means favorable mutagenesis results observed for one host may not carry over to another,” Clark says. “So far the mutants we’ve produced in N. crassa exhibit very favorable properties and the results we’re getting will help guide further efforts in engineering optimal enzyme performance for biofuels applications.” The EBI, which provided the funding for this research, is a collaborative partnership between BP, the funding agency, UC Berkeley, Berkeley Lab and the University of Illinois at Urbana-Champaign. Source: http://www.lbl.gov/ Taylor Scott International